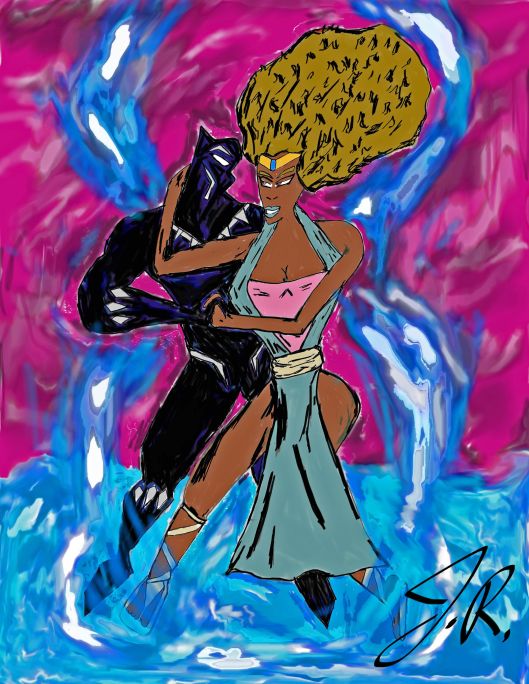 So this is intended to be a short issue.

1. There isn’t that much to say about why I drew this 2. I gotta pick cotton in a few hours so ya know.

I saw Black Panther this w.end with 2 of my friends and well Wakanda Forever.

I wonder if we would have had a Wakanda if slavery never existed? Fuck Slavery,Colonialism,and greedy racist white people.

Real Shit this movie is equal to Deadpool to me, even though unlike my favorite Merc with a Mouth I had no knowledge of the Wakanda King what so ever. However my favorite character in the movie was Killmonger. I want to model my life after him, maybe if I do I’ll get me some white slaves. Reparations is goals, so is bound through oppression of my oppressors.

But Jano what about your white friends? Would we be slaves too?

Dear White People, if I know you and actually like you, you’ll be in the house with me.If not you better get ready to pick cotton like my ancestors.

Anyway I decided to draw a picture with the King of Wakanda with the Empress Watatsumi of the Posei Kingdom and all of the country of Azure from my story Azure Ascendance. Yay Black Love and Black Excellence.

But Jano what about Storm?

Look I like Storm and the X-Men, I do they are one of my favorite non anime properties. BUT I felt like drawing my character with T’Challa instead. Straight like that.

To see the image check out the new gallery I made on my Behance Page here.. It will be where I put all drawings that are Bonus special occasionish, I’m calling it Bonus DLC, cute right.

Like I said this was gonna be a short issue cuz I have to be up in a few hours.

Spoiler Alert, this is the first thing I have colored in a month. NIGGA THE CATHARSIS I felt while I colored listening to Ella Mai, Sabrina Claudio, and Halsey on Spotify. While thinking that the new season of Atlanta premieres tonight. NIGGA WHAT!!!

Anyway thats it, next issue will be the Mad Monster Party images from a few weeks ago.