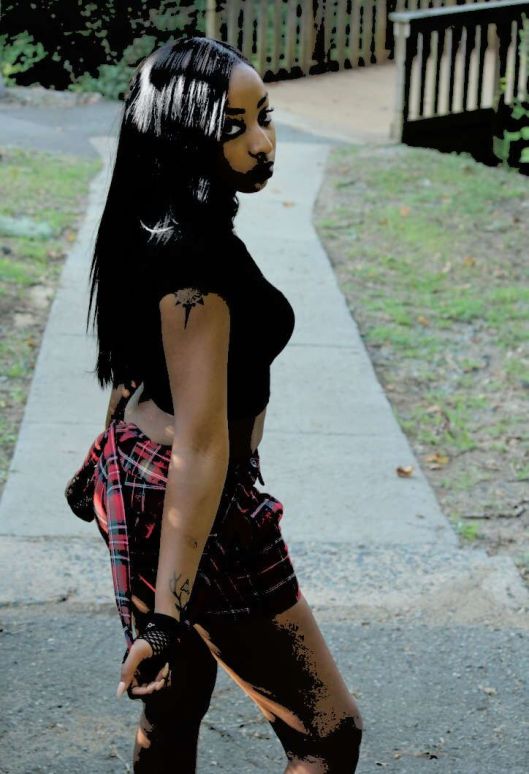 Because after four months of not working I finally started working again and my body hasn’t adjusted yet.

Yea that was a thing (again) this summer. And once I started working 4 weeks ago, I literally had the most random work and sleep schedule. The only thing I felt like doing was bathing my senses in streaming media, in particular Adventure Time, DareDevil Season 3,  Seven Deadly Sins, and now Castlevania.  And now here it is  Halloween. Holy Fuck. Sucks my costume won’t get here until after Halloween, but my scouter arrived tho Fuckery. Blargh it all.

Fuck, I literally just woke up and I am trying to remember how to use words. Especially since I haven’t typed anything significant in a while. Blargh. This may legit be a short issue since I have to be up in a few hours for the new cotton field I shuck and jive for.  Real shit, I kinda miss being unemployed and doing art. Awww tender moments.

Oh yea the next quest in my art journey.

So I had done one part of the photoshoot that was inspired by The Craft, but there was still another part I wanted to do. A goth girl on UNCC’s campus.

I went back to craigslist to find another model.

But Jano why didn’t you ask the model who you shot in the graveyard?

Honestly, I don’t know. Working with her was fun but just decided to find another one.

There may be a more legit reason, but like I said I just woke up and probably can’t remember at this moment.

So back to a barrage of replies via Craigslist. The few people that replied I was like nah ma’am y’all  ain’t it.  Until one Thursday night when I was at my friends house after doing a drawing session for my comic I got an email. Bingo we had a winner.Top grade aesthetic. We agreed to shoot on the upcoming Sunday.

Legit just remembered this is actually a short story, although considering how long it took me to get to this point is what make it feels long as hell.

That Sunday arrived and she asked if we could shoot earlier than we originally agreed on, which was kool. I went to go pick her up and we headed to UNCC’s campus.

Spoiler Alert, UNCC’s campus is big as fuck. It is. Especially considered to UNCG’s. The first time I ever walked on that campus, I legit got lost trying to find my car after arriving too late for a B.O.B concert in 2010. I would walk it at times for no real reason years after and realize this place has a lot of photo potential.

We arrive on campus and she told me doesn’t have a lot of model experience, which is fine because I’m still trying to gain experience directing models. I probably would have a lot more if people didn’t ghost on me all the fucking time, yet still like my social media post. OOPS there goes that shade covered sodium chloride.

The shoot went fine though. I have everything pre visualized before I shoot someone, and whatever I forgot gets replaced by a random idea. Balance in the name of Thanos. *Finger Snap. We talked about ideas that would be fun to do as we traversed that huge sun beat campus. I dropped her off and that was that.

Yea, this is a short story after all. Fuck it. I’ll give you a verbal preview of next issue.

Jano continues his art journey with a new concept. He purchases props for the concept once he finds a model who is down for the idea but he never hears from her again as she continues to post online.  Will Jano find a new model? Or will she reply to help him out?

If reading that made you go damn nigga and aroused your curiosity, then you’ll wanna read the next issue. Until then check out the images from this quest here.

Anyway, I’m over using words right now. Plus I have to be up in 4 hours for cotton field duties. Happy Halloween. Maybe next year I will get to be my favorite Saiyan Prince.

Fuck its gonna be cold in morning, ugh.